Iowa's Seventh General Assembly passed several road laws in 1858, a number of which remain in effect today. Included in those road laws was language calling for township trustees who were to establish road districts in each township and to appoint a superintendent for each road district.

In 1860, the General Assembly changed the landscape by creating County Boards of Supervisors. Their assigned tasks included responsibility of constructing and maintaining roads and bridges with the authority to levy taxes to accomplish their mission. County engineers were not yet part of the mix. Although people understood the benefits of having someone with training and experience oversee construction and maintenance of roads and bridges, the transition from horse to motor vehicle based transport made it a requirement after the turn of the century.

The Legislature first authorized counties to employ a competent person to prepare plans and specifications for county roads and bridges in 1911. Two years later, in 1913, the hiring of a competent engineer became mandatory.

The Bergman Secondary Road Act of 1929 increased the role of the county engineer by giving them greater responsibility by placing all roads, bridge, and culverts with the exception of state highway sand city streets under the direct supervision of county supervisors and the county engineer.

Legal authority over the secondary roads system is vested in each county's Board of Supervisors. The Engineer professionally advises the Board in establishing the goals, projects, and maintenance practices needed to provide the public with adequet transportation facilities. Once a plan is determined, the engineer - with the Board's support - carries out the actions needed to fulfill all objectives.

Road construction as it was performed in the early 1900s.

The Engineering office inventories the roadway, bridge, culvert and pavement assets contained within the network, assesses and tracks the condition and needs thereof; then develops programs of work, designs, develops and lets projects, and performs field inspection work. 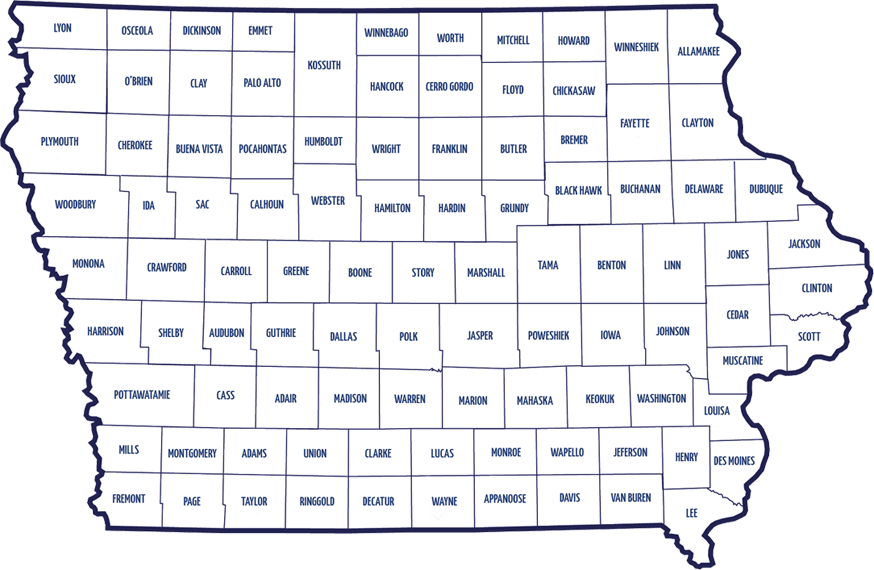 County engineers participate in and are supported by a number of work related associations and agencies:

All Iowa county engineers become members of ICEA. This professional / business association represents and guides county engineers in the setting of operational and design standards, negotiating compliance with state and federal requirements, continuing education, relations with the county supervisors association, and recognition of superior service.

The Service Bureau supports all county engineers and their staff members by supplying technology solutions that enhance efficiency. The ICEASB website provides a forum in which engineers can stay informed on issues, share knowledge, access apps and download information. A second website, called TPMS (for Transportation Program Management System) supports the planning, programming and development of road/bridge construction agendas not only for counties, but also for all other road agencies in Iowa.

NACE provides a forum in which county engineers from across the country can pool their voices to engage with the Federal Highway Administration, Congress and other national organizations.

ISAC is composed of and represents the collective interests of all Iowa county government officials, of which County Engineers are a member group. ISAC provides educational schools twice a year, represents county interests at the state legislature and helps research legal issues.

This branch of the Iowa DOT provides guidance to counties (and other local road agencies) on compliance with state laws, fulfillment of federal aid requirements, establishment of design standards, reporting, and fund availability.

This board oversees the identification, funding and implement of highway/bridge research projects in Iowa, with the goal of helping advance the knowledge and technology of those to build and operate the road system.